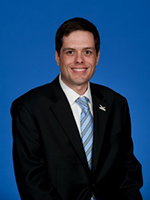 Prior to joining the Alliance, Todd was the Project Manager, Life Sciences with Enterprise Florida, where he was responsible for building the “Life Sciences” sector in the state under then Governor Bush.  Todd was the lead on several high-profile projects including Torrey Pines Institute of Molecular Studies, Becton Dickinson & Company, University of Miami Miller School of Medicine and the Max Planck Florida Institute.

Todd has continued his focus on the Life Sciences as part of his role with the Alliance and has worked with a number of recent relocating and/or expanding companies including Actavis Pharmaceuticals, Bolton Medical, Unipharma, LLC and SHL Group.

Todd began his economic development career in 2003, working as an intern with the Industrial Foundation of Washington County in Greenville, Mississippi.  After graduating with his Master’s degree in Economic Development in 2005, Todd was hired by the Foundation to develop and implement a retention and expansion program for the “Mississippi Delta.”   The program served as a job creation catalyst for an area that had consistently suffered from one of the highest unemployment rates in the nation.  Because of the success of the program, it was later implemented statewide by the Mississippi Development Authority.

Todd holds a Bachelor of Arts degree in Psychology with a minor in Business from the University of Arkansas, and his Master’s Degree in Economic Development as a recipient of the Herring Fellowship at Delta State University in Cleveland, Mississippi.  He is also a member of the Golden Key National Honor Society.