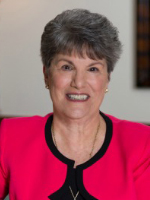 Sister Linda Bevilacqua, OP, PhD returned to her Alma Mater as Barry University's sixth president in July 2004. Her inauguration was truly a homecoming since throughout her diverse and distinguished career in higher education she has remained connected to Barry. After graduating magna cum laude from Barry in 1962 with a bachelor's degree in elementary education, she entered the Dominican Sisters of Adrian, Michigan, making final profession in 1968. Sister Linda taught first grade for five years and completed her master's degree in guidance and counseling at Siena Heights College (now University) in 1969. She then returned to Barry, her Alma Mater, as assistant dean of students, and was promoted to dean of student affairs in 1970, a position she held until 1978, when she left Barry to pursue doctoral studies.

Sister Linda completed her PhD in higher education administration and leadership at Michigan State University in 1980. She returned to Barry in 1981 as director of alternative programs. The following year, Sister Linda became associate vice president for academic affairs and the first dean of Barry's School of Professional and Career Education where she led the creation and administration of degree programs for working adults at various sites throughout the state of Florida, a Barry feature that continues to this day.

From 1993 to 2002, Sister Linda was president of Gwynedd-Mercy College (now University) in Gwynedd Valley, Pennsylvania. During her term, the College constructed four new buildings, doubled its full-time undergraduate population, and raised $10 million, at that time the largest amount of money ever raised. Sister Linda has been guiding the transformation of Barry University into an urban, comprehensive, multi-cultural, multi-ethnic university of around 8,000 students enrolled in one of two colleges and six schools.

Since 2004, Sister Linda is the recipient of the following awards: initial inductee into “Hall of Fame” of the Diocese of Brooklyn, New York; first recipient of the Barry University “Distinguished Adrian Dominican Sister Alumna Award;” first recipient of the Barry University School of Education “Leadership Award;” “Outstanding Community Service Award” from the South Florida Chapter of the American Society for Public Administration; “Chairman’s Award” from the Beacon Council; “Top Women-Led Not-for-Profit Businesses” from The Commonwealth Institute of South Florida; “Founder’s Award” from Florida Campus Compact; “Service Award” from Samaritan Counseling Centers; and the Greater Miami Shores Chamber of Commerce “2016 Citizen of the Year.”