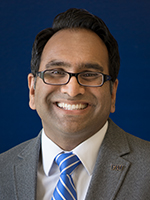 Saif Y. Ishoof, Esq. serves as Vice President for Engagement at Florida International University. Appointed in May 2015 by FIU President Mark B. Rosenberg, Saif leads a dynamic team in the Office of Engagement.

Saif guides the university’s participation with K-12 partners, economic development agencies, industry partners and social enterprises. He is also a Senior Fellow in the Steven J. Green School of International and Public Affairs where he is working to accelerate a key group of priorities for founding Dean, John Stack.

Previously, Saif served as founding Executive Director at City Year Miami, which provides 17-24 year olds an opportunity to serve one year in high-need schools as tutors, mentors and role models to address the opportunity gap. Under Saif’s leadership, the organization more than doubled in size and scope with an expansion from 8 to 18 schools and from 82 to 200 AmeriCorps members.

Saif’s professional career includes being a startup technology entrepreneur and an executive in agricultural and engineering companies. Saif earned his bachelor’s degree in Foreign Service from Georgetown University and his Juris Doctorate from the University of Miami School of Law.

Saif's personal and professional life has been defined by a commitment to developing young people, building civic institutions, international dialogue, and entrepreneurship:

He is a graduate of America’s Leaders of Change, a program of the National Urban Fellows and has served as a member of the Public Health Trust, the oversight body for Jackson Memorial Hospital. Saif is past chairman of the Miami-Dade County Asian American Advisory Board and a graduate of Leadership Florida Class 28. In the international realm, Saif participated in a U.S. State Department exchange to Turkey of Young American/Young Turkish leaders as part of a public diplomacy initiative.Among his many accomplishments, Saif was selected to be a member of the Marshall Memorial Fellowship. The Marshall Memorial Fellowship (MMF) is the flagship leadership development program of the German Marshall Fund of the United State’s (GMF), which prepares future leaders for transatlantic relations.

Saif was also named a 2016 Presidential Leadership Scholar, a program that is a collaborative between four Presidential centers and libraries. He was recognized by the Miami Herald as “20 Under 40" Leader in 2010 and was named 2010 Diversity Leader by the American Jewish Committee. In 2012, Saif was named a Thurgood Marshall College Fund Leader of the Year. Saif was recognized by the University of Miami School of Law Alumni Association as the Distinguished Leader of 2013.

Among his many civic accomplishments, he was named one of the “100 Most Influential People in Miami” in 2011 and 2012 by Poder Magazine. Saif was named a 2013 “Father of the Year” by the American Diabetes Association, among other accolades and recognitions.

In 2012, Saif co-founded a technology entrepreneurship initiative called TekFight to empower young innovators in Miami. Saif also serves as founding Chair of the Disruption Workgroup of the Greater Miami Chamber of Commerce.