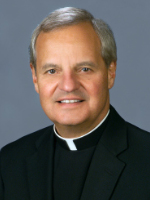 He is active in a wide range of community organizations and has been a significant presence in Miami since his arrival. His involvements also include the Archdiocese of Miami; Board of Governors for the Greater Miami Chamber of Commerce; Academic Leaders Council of the Beacon Council; One Community One Goal; Holocaust Documentation and Education Center Inc.; member of the Orange Bowl Committee; and he was appointed by former Gov. Jeb Bush to serve on the Governor’s Haiti Advisory Group. He is the spokesperson on human trafficking for the Institute for Intercultural Human Rights at St. Thomas University School of Law, and has testified before the United States Congress on the reauthorization of the human trafficking act.

He received his B.A. in humanities with a concentration in philosophy from Seton Hall University, a bachelor’s in sacred theology from the Catholic University in Washington, D.C., and a master’s of divinity from the Immaculate Conception Seminary in Darlington, New Jersey.