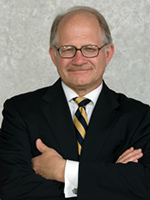 Mark B. Rosenberg is the fifth president of Florida International University, a public institution of higher education and leader in the production of minority degrees in the sciences and engineering among majority-minority institutions.

A political scientist specializing in Latin America, Dr. Rosenberg is the first FIU faculty member to ascend to the university's presidency bringing over forty years of experience in higher education leadership to this post.

The author of seven books and numerous scholarly articles on Latin America, Dr. Rosenberg was one of the principal architects of FIU's growth and expansion during the past decade and played a lead role in development of FIU's Herbert Wertheim College of Medicine.

Under his leadership as president, FIU has increased enrollment to almost 56,000 students, improved graduation rates by nearly 13% and hired over 500 new faculty. Dr. Rosenberg has provided leadership to grow the institution's budget, improve student graduation and retention rates, expand internships for enrolled students, and coordinate FIU's emergence as a leading producer of graduates in priority national and state areas focused on science, technology, engineering and math (STEM).

From 2005 to 2009, Dr. Rosenberg served as the second Chancellor (first formally selected by the Board of Governors) for the State University System of Florida. Prior to becoming chancellor, Dr. Rosenberg was integrally involved in the expansion and development of FIU into a major public research university.

Dr. Rosenberg holds a Ph.D. from the University of Pittsburgh and a B.A. from Miami University of Ohio, where he was Phi Beta Kappa.  He is a Fulbright Research Scholar, a member of the Council on Foreign Relations in New York, is the immediate past-Chair of the Greater Miami Chamber of Commerce (GMCC) and is currently serving as serves as Chair of the National Academies of Sciences, Engineering and Medicine’s Committee on Developing Indicators for Undergraduate STEM Education.