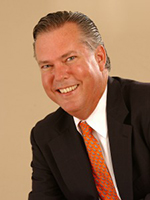 Bob Swindell was named President and CEO of the Greater Fort Lauderdale Alliance in November 2009. He joined the Alliance as the Senior Vice President, Business Development in 2003. Bob and his team assist local, national, and international companies already doing business here or those prospective companies considering a move to Greater Fort Lauderdale. The Alliance is Broward County's official public / private economic development partnership and brings together the Countys business community and 31 municipalities for the purposes of accelerating economic growth.

As a lifelong Broward resident, his background includes a history of Community Service and Business leadership; from business owner to angel investor. Prior to his position with the Alliance, Bob was President of Champion Manufacturing for 18 years; a Pompano Beach and Fort Lauderdale based industrial supply company serving the Southeastern United States. In 1992, during the impact of Hurricane Andrew and 1993, Bob chaired the local Board of the American Red Cross. Florida Governors Martinez, Chiles, and Bush have appointed Bob to lead statewide regulatory boards. In November 2012, Bob was again appointed to the Board of Pilot Commissioners by Governor Rick Scott. He serves on several Executive Boards including NAIOP (Commercial Real Estate Development Association), SFTA (South Florida Technology Alliance), Workforce One, EDC (Enterprise Development Corporation), FEDC (Florida Economic Development Council) and the Broward Education Foundation. In October of 2005 Bob was appointed by the Broward County Commission to the Florida Atlantic Research & Development Park Authority. He is a 1986 alumnus of Leadership Broward - Class V and was recognized as a 2011 Business Leader of the Year by the Leadership Broward Foundation. And he is a member of this year's Leadership Florida Class XXXI.