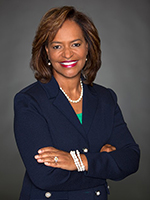 Before joining Palm Beach State in 2015, President Parker was executive vice president and chief operating officer at Florida Polytechnic University, the state’s first public university focused on applied research in STEM (science, technology, engineering and mathematics) fields. She also served for more than a decade on the Florida Board of Governors of the State University System and served on the University of Central Florida’s Board of Trustees. She was a partner in the Jacksonville law firm of Lawrence & Parker, general counsel at Edward Waters College, general counsel for the 11th Episcopal District of the AME Church, assistant general counsel for the state Department of Transportation, and assistant public defender in Miami-Dade County. She is on the board of directors of Orchid Island Capital, a publicly-traded specialty finance company.